An unforgetable week Dubrovnik Dub Bowl International Tennis Championship has come to a close.
As we close the Tournament for this year, we would like to thank you for playing your part in making Dubrovnik Dub Bowl such a memorable event.
Rounded up on July 17 with 69 participating countries, eight edition of Dubrovnik Dub Bowl is in the books and Winners have been crowned in all categories. 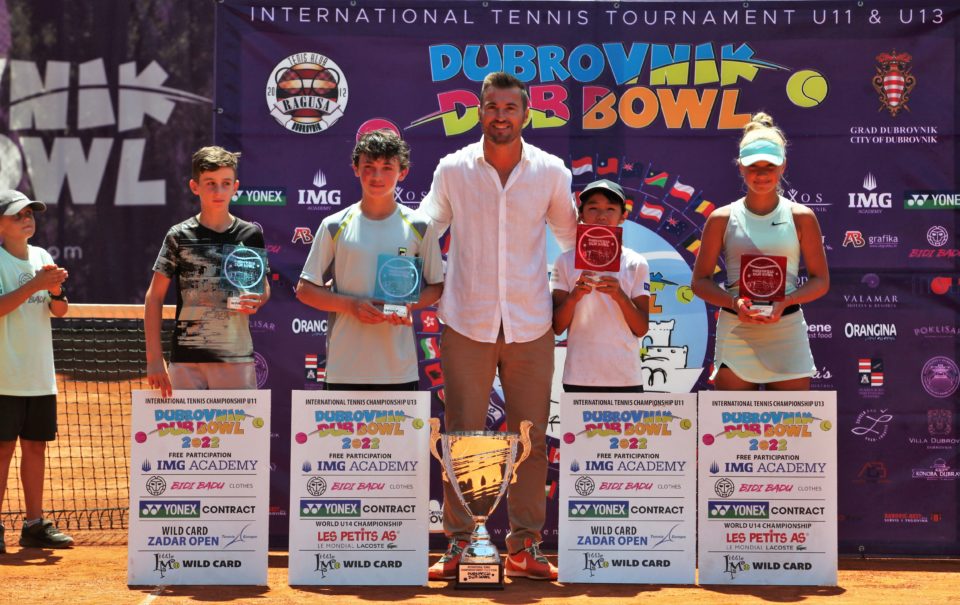 64 players were awarded throughout the tournament and the final four will go down in Dubrovnik Dub Bowl history.

Brazil has their first ever Dubrovnik Dub Bowl champion. Even though it took him exhausting 30 hours to reach Dubrovnik, that did not stop Felipe from playing his best tennis at Dub Bowl. Mamede stormed from a set down to defeat Serbia’s finalist Filip Djokic 3-6 6-2 6-3 to claim the boys’ singles U13 trophy.

Berzina made history when she won both; Doubles and Singles Tournament with no game lost 6:0 6:0. Armed with confidence and fighting spirit, Keisija  kept on going, kept on running and winning the 8th edition of Dubrovnik Dub Bowl International Championship.

It hasn’t been an easy road for MaxLorincik . In addition to round robin, he played 3 extremely hard matches on his road to finals. Maxhad several tricks up his sleeve and his fighting attitude helped him come out on top in tight situations. We will for sure be seeing a lot more of this Slovakian in the future.

Sakino is a joy to watch. The winning storyline of Sakino spreaded not only in winning the singles but also the doubles crown. She has a versatile game where she can adapt on different players. With a very calm personality, this Japanese player brought an extremely consistent play and made it far to her first Dubrovnik Dub Bowl title.

“Amazing week in Dubrovnik. Everything was organized at top level”

“The tournament was very nice. I recommend to all my tennis friends. It was very organized and had a lot of activities off court.  The environment was unbelievable with an amazing city and surroundings. The staff of the tournament was very helpful and kind to all of us.The best part of it in my opinion is that you have at least 3 or more singles matches and also doublesDefinitely a must go!”

“First of all, I would like to thank our tournament organizers and sponsors for their wonderful support. I really enjoyed playing tennis in Dubrovnik because a lot of people including my friends from different countries came to watch my games and often cheered for me in Japanese! I played my best tennis here and I had really good time both on and off court. I hope to be back to Dubrovnik Dub Bowl next year.”

“Dubrovnik Dub Bowl was one of the best Tournaments I ever played,but not just for the result i made.It was perfect organized,super programm for players and all supporters.Dubrovnik town and beaches are very beautiful,definitely i will be back next year. Thanks for all DUBROVNIK DUB BOWL. Thank you for the perfect tournament”

U13 2021 Dubrovnik Dub Bowl winners were awarded with journey to the USA, Florida to practice at one of the world’s leading sports academies IMG Academy, contract with one of the leading tennis brands – Yonex, clothes contract with Bidi Badu and entry for „U14 World Championship – Les Petits As“ in Tarbes, France and Little Mo – international prestigious tennis tournamnet in the USA.

U11 2021 Dubrovnik Dub Bowl winners were awarded with journey to the USA, Florida to practice at one of the world’s leading sports academies IMG Academy, contract with one of the leading tennis brands – Yonex, clothes contract with Bidi Badu and entry into Little Mo – international prestigious tennis tournamnet in the USA and Tennis Europe wild card „Zadar Open U14“.