Sixth edition of Dubrovnik Dub Bowl 2019 was a record year hosting over 150 players from 63 world countries who played over 3,000 matches on „Tennis Centre Dubrovnik“ courts. 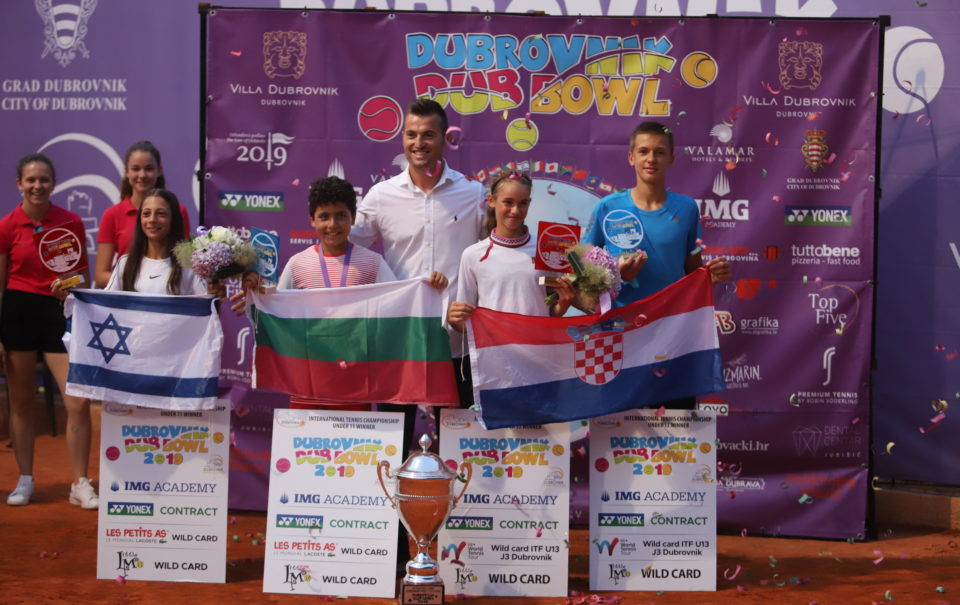 In 2019 Dubrovnik Dub Bowl winners were awarded with journey to the USA, Florida to practice at one of the world’s leading sports academies IMG Academy. wild cards to play and compete at ITF tournaments „ITF J3 Dubrovnik“, Tennis Europe tournaments „Bulgaria Cup U14“ , USA Tour tournaments „Little Mo“ and a wild card to compete at the world’s U14 championship – Les Petits As. Our stars have also been awarded with yearly contract of one of the biggest sport equipment manufacturers Yonex.

“Dubrovnik Dub Bowl is my favorite tournament. Everything is great, I played a lot of matches, but I had a lot of fun off the court too – meeting new friends, a movie night, pool party, tennis on Stradun. I played this tournament 4 times because I really loved it and last year was my last participation because I was 13 so i’m very happy that i’ve won it.”

“It was one of my best tournaments I played. I had a great matches like against Zack Stephens in the final. Organization was great, I met new friends, had a lot of fun and gathered new experience. The most existing part of that tournament for me is my final match- it was like a  pro- with ball boys, chair reffery and similar. I recommend everyone to come to this amazing International tournament.

The best word I could think of to describe this tournament is electrifying!! I cant describe the feeling of walking in front of everyone wearing my national flag at the end of this amazing tournament. This was by far my favourite tournament, it brought out the best in me .And to top it off ,as winner, I got treated to a week at the IMG Academy and got coached by Nick Bollettieri himself, simply amazing,thank you, and I hope to be back this year as well

“I was very impressed with the. organization ,I. am glad that many of acquaintances had the opportunity to watch me play the finals of the tournament .I recommended other players from Bulgaria to participate.
Thanks for the incredible emotions i experienced.I go to many tournament around the world,but the Dubrovnik ball i my favourites.I participated in the Eddie Herr tournament in America thanks to your  prize.Thanks for everything!”