Participants of the fourth edition of Dubrovnik Dub Bowl U11 and U13 Tournament
demonstrated how the age does not measure their maturity on the court, play style nor approach. 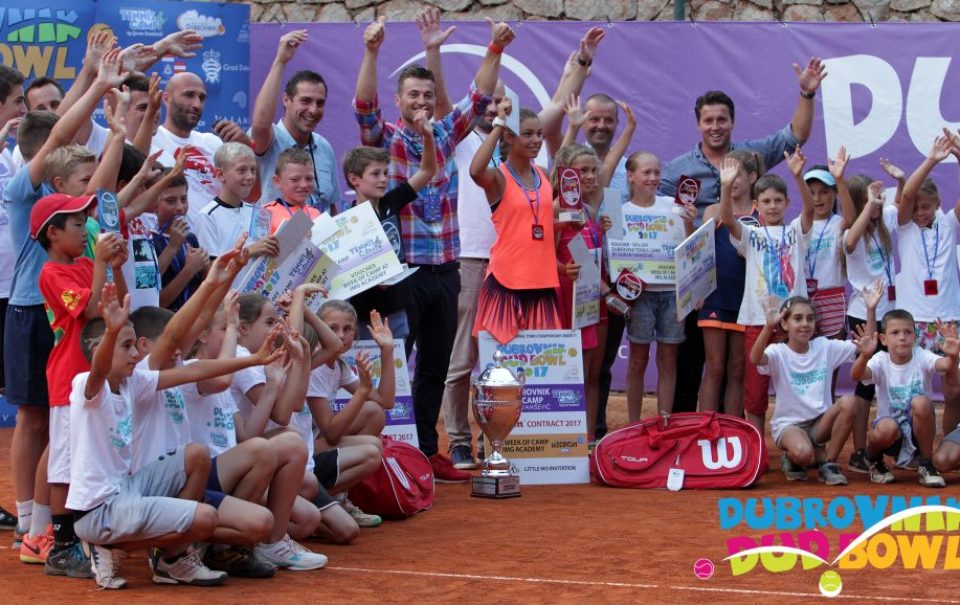 Director Pasko Barovic highlighted the importance of promoting sports in general throughout the cultural exchange and development of the competitive spirit, as well creating forever memories and valuable friendships.  The positive atmosphere was contagious throughout the tournament, from young players to parents, coaches and friends. During the tournament young tennis players maintained stability, managed to present their skills at their peak and develop their own winning strategy.

This years U11 winners Zack Stephens from GB and Ela Nala Milić from Slovenia were personally awarded by Goran Ivanišević with free Goran Ivanišević Summer Camp, yearly contract with one of world leading company in sport industry -Wilson, and invitation for prestige tournaments such as Little Mo.

the winners of U13 Tobias Wallin from Sweden and was Aleksandra Simeva from Macedonia also were personally awarded by legendary Wimbledon 2001 winner and one of the most famous Croatian tennis players of all time – Goran Ivanisevic, with free Goran Ivanišević Summer Camp, a yearly contract of one of the biggest sport equipment manufacturers Yonex as well as a “wild card” for big international tournament Little Mo.

“This was the first time I played DuB Bowl in Dubrovnik and it was a fantastic experience! The final day was super cool with a great atmosphere during the final and I am happy I came through as the winner after a tough match in three sets agains a great opponent. Next year I am too old to defend my title, but I will for sure recommend my younger friends to go and play. The activities in the evenings such as the pizza evening and the visit to the cinema were also fun. Thanks again to Pasko and everybody who makes this tournament possible and hope to see you on the tour!

I would highly recommend Dubrovnik Dub Bowl to all the young players out there, because of the competition quality, amazing organization, kind and helpfull people who contributed to the overall experience. The feeling was like a Grand Slam. I am looking forward to next year.

“The organization is very good, I like the way they do it. You get minimum 4 and
maximum 7 matches and matches. It is really good because in some tournaments,
you lose once and you only get one match. I would highly recommend it to people
who would like to come next year, as it is a great tournament to join.”